Stay out of The Product-First Trap 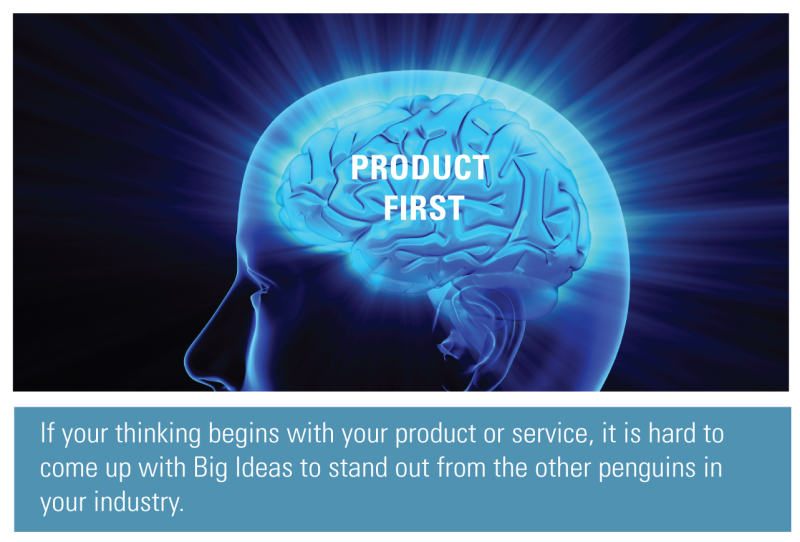 Many companies are not able to grow in today's marketplace because they are stuck in The Product-First Trap. People and companies fall into this trap when they think first and talk first about their products and services. When asked what they do, they say: I am a dentist. I am a travel agent. Or we make tennis shoes. This seems like a natural thing to say. After all, that's what they do. But this product-first thinking is a trap for three primary reasons.

One, when you describe your business in this product-first manner, it is likely that hundreds, if not thousands of other companies are describing themselves in the same way. That means your company doesn't stand out because your prospects are hearing the same story from hundreds of your competitors.

Two, if you tell a product-first story, your prospects will think you are a salesperson. They will think you are trying sell them your product or service. This will make them turn away because they don't want to hear your sales pitch. This sales-aversion will make it harder for you to meet new prospects and develop relationships with them.

Thirdly, when you finally acknowledge the first and second problem, and try to come up with a new way to differentiate yourself, you can't do it because your thinking keeps going back to your core product or service. Your mindset doesn't allow you to think of new big ideas to differentiate yourself. That's why it is called a trap. Your product-first mindset doesn't enable you to break away from the other competitors in your industry.

For example, Apple was stuck in The Product-First Trap until 1999. Before that time, they were a small company that sold its computers to a small group of devoted customers. They thought of themselves as a computer company. But then in 1999, they changed their mindset, and broke out of product-first thinking. That's when they began inventing new big ideas such as the iPod, iTunes, the iPhone and the iPad. Today, as one of the most successful companies in the world, they are no longer just a computer company. They are in a category of their own. They achieved this distinction not because they are smarter or more creative than other companies, but because they changed their product-first mindset and adopted a new and better business model, what we call The Relationship-First Formula™ (see next concept).